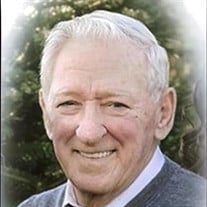 Tracy Gene Lehman born January 3, 1936 went home to be with the Lord Monday October 5, 2020 after a courageous fight with Covid over the past 2 months. He was a graduate of Woodrow Wilson High School Class of 1954. He then worked in the steel mill and coal mines for twenty plus years before becoming the sole owner of Coal Crafters Inc which he ran for 30 years. After retiring he continued to do various jobs, never allowing anything to slow him down. He met his wife Janet Lehman in 1954 and they were married in June of 1956. They were married for 64 wonderful years. All who knew him know he loved his family and his church as they were the forefront of everything he did. He loved hunting and took many trips out west to which he loved to sit and reminisce about. He was a faithful member of Happy Valley Church of Jesus Christ in Johnson City where you would find him greeting everyone as they came through the doors. He was small in stature but he had the strength to carry his family through all the trials life gave. He will be greatly missed and never forgotten He is survived by his wife Janet Lehman of Johnson City, daughter Teresa Vest of Johnson City, and a son Dwayne Lehman. Five grandchildren Deborah Love and husband Monty Love, Ruth Adkins and husband Caleb Adkins, April Dunbar and husband Keith Dunbar, Benjamin Lehman, and Hannah Radford. Six great-grandchildren Connor Love, Madison Love, Kayden Love, Ian Adkins, Colin Adkins, and Kyle Dunbar whom he all greatly loved and cherished. Seven siblings Virginia Jenny Lilly, Audra Mastrippolito, Doug Lehman, Kenneth Lehman, Kathy Seaman, Eyvonne Stanley, and Nancy Stanley, He was preceded in death by his father and mother Arthur and Blanche Lehman, his beloved sister Ann Gravley, sister Linda Sue, and two brothers Orville and Jerry Lehman. Services will be held at Happy Valley Church of Jesus Christ with the viewing from 5-7 pm on Thursday October 8, 2020 and the burial on Friday at 11 at Fairview Cemetery with Pastor Donny Reagan officiating. Pallbearers Connor Love, Ian Adkins, Monty Love, Keith Dunbar, Caleb Adkins, Chris Rutherford, Ben Rutherford, Keith Phillips, and Dal Ornduff. Honorary pallbearers Don Cooper, Colin Adkins, and Kyle Dunbar. Condolences may be made online at www.wadugger.com. Woodall-Anderson and Dugger Funeral Home, 108 W. Watauga Avenue, Johnson City is serving the Lehman family. 423-928-2245

Tracy Gene Lehman born January 3, 1936 went home to be with the Lord Monday October 5, 2020 after a courageous fight with Covid over the past 2 months. He was a graduate of Woodrow Wilson High School Class of 1954. He then worked in the steel... View Obituary & Service Information

The family of Tracy Gene Lehman created this Life Tributes page to make it easy to share your memories.

Send flowers to the Lehman family.