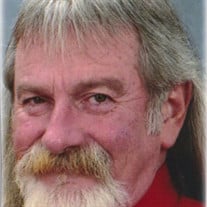 Tony “Pappy” Eugene Morgan, 66, went home to be with the Lord on May 4, 2020 surrounded by the ones he loved. Tony was a very active member of his community, always helping others. He loved to ride his bike, travel, fish and work outside in his flower garden. He was a proud veteran of the U.S. Army and Air Force. Tony shared many talents from being a nurse to bounty hunter. He was of the Baptist faith. To Tony, family was the most important part of his life. He was a loving husband, father, grandfather, brother, uncle and friend. He will be greatly missed by so many. Tony is preceded in death by his parents, AJ “Porky” Morgan and Betty Robinette; a sister, Donna Morgan. His memories will be cherished and kept alive by his loving wife, Teresa Morgan of 12 years who he said made the past 17 years of his life the most memorable and worth living. Son, Jason Morgan and his son, Jayden; Step-children, Ashley Smith, Chasidy Howard, Cody Howard and Harley Howard who he had the joy of sharing with Teresa. Grandchildren, Kelsi Cade, Karlie Howard, Koltin Benfield, Mikenzie Howard, Serenity Howard and one very special grandson on the way, Remington Eugene “Winchester” as Pappy called him. a very special granddaughter, Emrielle Smith who he raised as his own; Father-in-law, Cecil Yoakley Sr.. brother and sisters-in-law, Cecil and wife, Christy Yoakley, Robert Yoakley and Dennis Yoakley. Very special sister and brother-in-law, Helen and Harvey Howard. Several nieces and nephews who were very special to him including a very special nephew, William Yoakley and family. Funeral services for Tony will be conducted at 1:00 PM Monday, May 11, 2020 in the East Chapel of Appalachian Funeral Home, 800 E. Watauga Avenue, Johnson City. The family will receive friends from 12:00 noon until the service hour. Interment will follow in the Mountain Home National Cemetery. Honorary pallbearers will be Jason Morgan, Cody Howard, Harley Howard, William Yoakley, Cecil Yoakley and Robert Yoakley. A graveside service with full Military Honors to honor the life of Tony will be held at a later time which will be announced. Flowers, donations and condolences may be sent to the funeral home or to the Morgan family at the residence. Condolences may be made online at www.wadugger.com. Arrangements by Woodall-Anderson and Dugger Funeral Home, 108 W. Watauga Avenue, Johnson City is serving the Morgan family. 423-928-2245 This obituary lovingly written by the family.

Tony &#8220;Pappy&#8221; Eugene Morgan, 66, went home to be with the Lord on May 4, 2020 surrounded by the ones he loved. Tony was a very active member of his community, always helping others. He loved to ride his bike, travel, fish and work... View Obituary & Service Information

The family of Tony Eugene "Pappy" Morgan created this Life Tributes page to make it easy to share your memories.

Send flowers to the Morgan family.