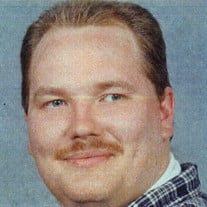 Thomas Christopher “Hoss” Watts, 49, Gray, Tennessee passed away unexpectedly Sunday, January 30, 2022 at his residence. He was a native and lifelong resident of Washington County and was a son of Jackie Street and the late Thomas Watts. Chris was employed with Crown Laboratories in Johnson City. Chris enjoyed spending time with family and friends, especially those of the tabletop gaming community. He enjoyed reading and miniature painting. He shared these passions with all who knew him. He truly loved people, and was well-loved in return. In addition to his father, he was preceded in death by his maternal grandparents, Cecil and Beatrice Plaster; his paternal grandparents, Earl and Arminda Tilson Watts; an uncle, George Hicks and an aunt, Maxine Alexander. Survivors include his mother, Jackie Plaster Street of Gray; a brother, Eric Watts and his wife, Dusty of Jonesborough; several aunts, uncles and cousins; special friends, Chris McIntosh, Michael Seaver, and Gary Vines and all of his friends in the gaming community, including his work friends at Crown Laboratories, the Dairy Queen of Gray and CACO. A Celebration of Life Service for Chris will be conducted at 1:30 PM Thursday, February 10, 2022 in the East Chapel of Appalachian Funeral Home, 800 E. Watauga Avenue, Johnson City. The family will receive friends from 12:00 noon until the service hour. Graveside services will follow in Patton-Simmons Cemetery, Milligan College. Pallbearers will be Justin and Jordan Johnson, Hunter Miller, Jacob, Denton and Austin Alexander. Condolences may be made online at www.wadugger.com. Arrangements by Woodall-Anderson and Dugger Funeral Home, 108 W. Watauga Avenue, Johnson City. 423-928-2245

Thomas Christopher &#8220;Hoss&#8221; Watts, 49, Gray, Tennessee passed away unexpectedly Sunday, January 30, 2022 at his residence. He was a native and lifelong resident of Washington County and was a son of Jackie Street and the late Thomas... View Obituary & Service Information

The family of Thomas Christopher Watts created this Life Tributes page to make it easy to share your memories.

Send flowers to the Watts family.