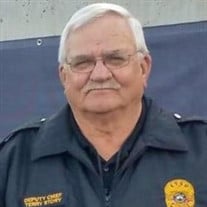 Terry Ray Story, Telford was called to his Heavenly home, Saturday, February 12, 2022 in the Johnson City Medical Center. He was born on June 23, 1956 to the late Charles and June Jennings Story. Terry attended Lamar School and David Crockett High School “class of 1973”. He was a graduate of East Tennessee State University. Terry started his career at Washington County Sheriffs Department. After 34 years at ETSU, Terry retired as the Deputy Chief in the Public Safety Department. In the summer of 1975 at the Lamar Little League baseball fields, Terry met the love of his life. Terry and Evelyn were married June 4, 1976. He spent the next 45+ years spoiling his “Wa”. He was so proud of their children, grandchildren and their first little great-grandson due this Spring. Terry was affectionately known as the Tinman, Nana’s sweet T and to so many as Pops. Terry’s favorite thing to do was to take the kid’s fishing or just hanging out. He proudly enjoyed watching their sporting events. His “happiest” place was on the baseball field especially with Brayden and his friends at Grandview School. Terry loved sharing his love of the game with the young men, as well as Logan and Abby. In addition to his parents he was preceded in death by his maternal grandmother, Ruth Jennings; paternal grandparents, Lonnie and Laurie Story; his in-laws, Bill and Marie Taylor. Pops is survived by his loving wife, Evelyn Taylor Story; son, Jeff Story and his wife, Tiffany; his daughter, Jessica Page and husband, Robert Page; his granddaughters, Destiny Story, Abby Page, Sarah Sparks and Destiny Hensley; his grandsons, Brayden Page, Logan Page, Austin Hensley and soon to be, Langston Ray; Even the grandchildren’s pets were always excited to be at Pops and Nana’s. At Pops request there will be no formal services. The family will have a Celebration of Life Service 3:00 PM Sunday, March 13, 2022 at New Victory Baptist Church, Telford. This obituary was lovingly written by his family. Condolences may be made online at www.wadugger.com. Woodall-Anderson and Dugger Funeral Home, 108 W. Watauga Avenue, Johnson City is serving the Story family. 423-928-2245

The family of Terry Ray Story created this Life Tributes page to make it easy to share your memories.

Send flowers to the Story family.