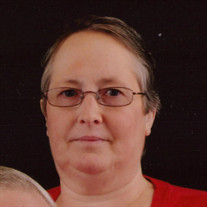 Teresa A. Shankle, 63, Johnson City passed away Sunday, February 14, 2021 in the Johnson City Medical Center with her family at her side. She was a native of Hawaii and was a daughter of the late Jude and Kathleen Stroud Gremillion. Teresa attended Elk Park Baptist Church and Maranatha Tabernacle in Unicoi. She was employed by Citibank Corporation. Teresa was an avid reader and animal lover. She enjoyed spending her time with her 4 grandsons while devoting many hours crocheting them blankets. Survivors include her husband, Gary D. Shankle of the home; three daughters, Cynthia Leonard of Kingport, Tabitha Overbay and Hannah Shankle both of Johnson City; her mother-in-law, Sylvia Shankle of Johnson City; three brothers, Michael Gremillion of South Carolina, Dennis Gremillion of Kansas and Joey Gremillion of Louisiana; a sister, Phyllis Gremillion of Missouri; four grandchildren, Tyler Overbay, Gabe Overbay, Derrick Leonard and Dylan Leonard; also several brothers and sisters-in-law, nieces and nephews. Funeral services for Teresa will be conducted at 2:00 PM Thursday, February 18, 2021 in the East Chapel of Appalachian Funeral Home, 800 E. Watauga Avenue with Pastor E.L. Wheeler officiating. Special music will be provided by Queenie Wheeler. The family will receive friends from 1:00 PM until the service hour. Graveside services will follow in the Washington County Memorial Gardens. Pallbearers will be Gabe and Tyler Overbay, James Tilley, Billy Shankle, Jerry Shankle, Joey Gremillion and Mike Gremillion. Following Covid-19 Guidelines everyone attending will be asked to wear a face mask and practice social distancing. The family would like to give special thanks to all of the nurses and staff on the 5400 wing of Johnson City Medical Center for the wonderful care they provided. Condolences may be made online at www.wadugger.com. Woodall-Anderson and Dugger Funeral Home, 108 W. Watauga Avenue, Johnson City is serving the Shankle family. 423-928-2245

Teresa A. Shankle, 63, Johnson City passed away Sunday, February 14, 2021 in the Johnson City Medical Center with her family at her side. She was a native of Hawaii and was a daughter of the late Jude and Kathleen Stroud Gremillion. Teresa... View Obituary & Service Information

The family of Teresa Annette Shankle created this Life Tributes page to make it easy to share your memories.

Send flowers to the Shankle family.