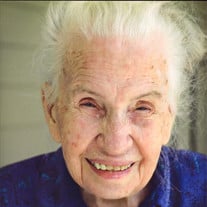 Mrs. Nora Elizabeth Francis “Tootsie”, age 88 of Johnson City, Tennessee died Monday, October 5, 2020 at Dominion Assisted Living. She lived in Johnson City her entire life and was married to but one man, Robert Lee Francis, who preceded her in death after 66 years of marriage. Tootsie’s parents, Rev. Cecil and Carrie Barnett Swartz partnered in founding the Church of Jesus of Johnson City in 1952. She faithfully served as a founding member of the church, Tootsie was a bookkeeper and treasurer for 72 years. She voluntarily held this role without salary, believing it her calling and thus her service to the Lord. She also loved to give gifts and gave to all she knew expressing her love and care to others. Tootsie and her husband were giving people, always willing to see the needs and give to those around them. At their 5oth wedding anniversary party, they requested not to receive gifts, but instead gave gifts to all who came. Then, at their 60th anniversary party, in lieu of gifts they requested canned goods to be donated to a local charity. Family and friends always knew they were welcome to join the Francis household for a meal at any time, with an extra table setting often placed at meals. Tootsie’s legacy of her devotion to Christ, her family and her compassionate and generous heart will always be remembered. She was a hard worker, overseeing the Francis rental properties with her husband, and believed people deserved a second chance. She valued peacemaking rather than conflict and believed forgiveness was stronger than strife. Tootsie enjoyed her family and friends. She is lovingly remembered as a caring mother, grandmother, great-grandmother, sister, aunt and friend. She lived a life of integrity, showing mercy and compassion and faithfully serving the Lord. She is preceded in death by her parents, Cecil and Carrie Swartz; two brothers, Harold Swartz and Johnny Farner; and three sisters, Joyce Grobb, Shelby Buck and Aletha Davis; Tootsie is survived by two sons, Rickey Lee Francis and wife, Kim of Duffield, VA and David Francis of Johnson City; one daughter, Linda Delores Mann of Bristol, VA; four grandchildren, Richard Francis of Dungannon, VA, Jason Mann and wife, Elisa of San Antonio, TX, Jona Osborne and husband, Don of Bluff City and Elizabeth Smith and husband, Joey of Powder Springs, GA; three great-grandchildren, twins Luke and Nate Osborne and Layton Smith; Mrs. Francis is also survived by three sisters, Margaret Campbell and husband, Bobby and JoAnne Patterson and husband, Dennie and Frances Jackson. A special thank you to the staff and especially the R.A.’s at the Tapestry Wing at Dominion Assisted Living who have cared for Tootsie since June of 2016. Also a special thanks to Caris Hospice for their care as well. Also Phyllis Stimes being the angel that was mother’s buddy. Graveside services for Tootsie will be conducted at 1:00 PM Thursday, October 8, 2020 in the Roselawn Memory Park with Rev. Tom Swafford officiating. For those attending you are asked to meet at the cemetery by 12:50 PM. The family asks that masks be worn and practice social distancing. In lieu of flowers the family asks that contributions be made to the Church of Jesus, 809 W. Main Street, Johnson City, TN 378604 Condolences may be made online at www.wadugger.com. Woodall-Anderson and Dugger Funeral Home, 108 W. Watauga Avenue, Johnson City is serving the Francis family. 423-928-2245

The family of Nora "Tootsie" Elizabeth Francis created this Life Tributes page to make it easy to share your memories.

Send flowers to the Francis family.