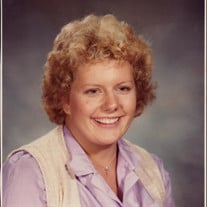 Katherine "Katie" Ellen Tucker Ohmer, 61, of Johnson City, TN, was called home to the Lord on Sunday March 13, 2022. Katie was the youngest of Lt. Col. Earle A. and Bette Mae (Kirby) Tucker’s 6 children. She was born and raised in Alexandria, Virginia, attended Immanuel Lutheran School and graduated from Calvary Baptist High School. At 20 her life changed forever when the Holy Spirit moved in her to want to serve the Lord. After graduating from Concordia University, Chicago, she taught elementary school in the Missouri Synod Lutheran school system. In 1991 she married Charles Stephen "Steve" Ohmer, a talented organist. They settled in Johnson City and became members of St. Mary’s Roman Catholic Church. Katie and Steve parented a menagerie of cats (Guillaume and Guinevere), birds (Budgie) and dogs (Dolly, Dooly, Fritz, Abby). In addition to her parents and several of her fur children, Katie is preceded in death by her beloved husband in 2010 and her dear nephew Robert Anthony Coletti in 2017. Katie never met a stranger but was particularly drawn to people who are invisible to society – e.g., the poor, people with Down Syndrome, the lonely in nursing homes, etc. She lit up every room with her ebullient spirit and infectious sense of fun. She never shied from sharing her faith and was an enthusiastic witness for the Lord. Those left to remember and cherish her memory include her sister Elizabeth Vernier of Arlington, VA; sister Mary Lou Coletti and her husband Bob of Watauga, TN; brother Joseph Tucker and his wife Toni of Ruckersville, VA; brother Forrest Lee Tucker and his wife Mary Lynn of Wirtz, VA; brother Kirby Tucker and his wife Susan of Tucson, AZ; as well as numerous nieces, nephews, cousins, second cousins, grand-nephews, grand-nieces and one great grand-niece on the way. Katie also touched the lives of hundreds of former students who remember her warmth and encouragement, as well as countless friends she made during her journey in life. Two people who were especially close to Katie are her niece Cindy Coletti and her best friend Karen Smith. We will all miss her fiercely but as Karen wrote: She was a precious child a loving wife a devoted mom to any paws a sister an aunt a cousin and a friend We’ll miss her forever but see her again A funeral mass for Katherine will be conducted at St. Mary’s Catholic Church, Saturday, May 7, 2022 at 10:30 AM followed by interment at St. Ann’s Catholic Church in Bristol, Virginia at 1:00 PM. Condolences may be made online at www.wadugger.com. Woodall-Anderson & Dugger Funeral Home, 108 W. Watauga Avenue, Johnson City, TN, is serving the Ohmer family. 423-928-2245

Katherine "Katie" Ellen Tucker Ohmer, 61, of Johnson City, TN, was called home to the Lord on Sunday March 13, 2022. Katie was the youngest of Lt. Col. Earle A. and Bette Mae (Kirby) Tucker&#8217;s 6 children. She was born and raised in Alexandria,... View Obituary & Service Information

The family of Katherine Ellen Tucker Ohmer created this Life Tributes page to make it easy to share your memories.

Send flowers to the Ohmer family.