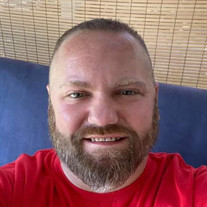 Jonathan Allen Chapman, 40, Johnson City passed away unexpectedly Monday December 13, 2021. He was a native of Modesto, California and was a son of Joseph Allen Glass and Sandra Thomas Chapman. Jonathan proudly served his country as an active duty service member for 12+ years. His career began in the US Navy where he served as a corpsman. That service included a tour to Iraq with the USMC, serving as a Devil Doc for his unit on the front lines. Following his term in the Navy he enlisted with the US Army and served as a LVN in the burn unit at SAMMC on Fort Sam Houston in San Antonio TX. During his service there he served on the US Army burn flight team providing care to severely wounded soldiers in transport back to the burn unit. He was decorated with USN/USMC Medal, Army Achievement Medal, Navy/Marine combat action ribbon, USN/USMC Presidential Unit Citation, Army good conduct medal, and USN good conduct medal. Jonathan was known by his friends and associates to be a very generous and kind man, always putting the needs of others first. He was an outstanding nurse, treating his patients and their families with the most compassionate care. His family and friends meant the world to him and he always took the responsibility of caring for everyone very seriously. He will be truly missed by so many. Jonathan was preceded in death by his maternal grandparents, Jasper and Mary Lou Thomas; his step-father, John Chapman and his mother, Dorothy Chapman; his paternal grandparents, Burnis Carl Glass and Edna Tyler Glass; also his 7th time grandfather who played an instrumental role in the Revolutionary War and his uncle, Paster David Glass. Survivors include his mother, Sandra Thomas Chapman of Johnson City; his father, Joseph Allen Glass and his wife, Nancy of Modesto, California; his son, Aiden Chapman of Greenbay, Wisconsin; a sister, Dawna Rodriguez and her husband, Hector of Johnson City; a nephew, Wyatt Rodriguez; a niece, Lillyanna Rodriguez; his aunts, Julia Dewey of Spokane, Washington and Diana Wells of Ukiah, CA; also his extended family in California including seven first cousins. Graveside services with Military Honors will be conducted at 11:00 AM Thursday, December 23, 2021 in the Mountain Home National Cemetery. For those attending you are asked to meet at the cemetery by 10:50 AM. Condolences may be made online at www.wadugger.com. Woodall-Anderson and Dugger Funeral Home, 108 W. Watauga Avenue, Johnson City is serving the Chapman/Glass family.

Jonathan Allen Chapman, 40, Johnson City passed away unexpectedly Monday December 13, 2021. He was a native of Modesto, California and was a son of Joseph Allen Glass and Sandra Thomas Chapman. Jonathan proudly served his country as an active... View Obituary & Service Information

The family of Jonathan Allen Chapman created this Life Tributes page to make it easy to share your memories.

Send flowers to the Chapman family.