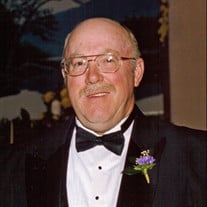 Joe Jimmie Stewart, 73 of Johnson City passed away Wednesday, July 28, 2021 at The Waters of Johnson City. He was a native of Johnson City and was a son of the late Clayton C. Stewart and Leona Krell Stewart. Mr. Stewart was a member of Central Church of Christ. He was a veteran having served his country in the U.S. Army. Mr. Stewart retired from ETSU where he worked in Public Safety. He enjoyed fishing with friends and family and riding Goldwing motorcycles. In addition to his parents he was preceded in death by his wife Jo Ernestine Brown Stewart in 2012. Survivors include his son, Clayton Stewart and his wife, Kasey of Elizabethton; a grandson, Zakery Stewart; a brother, John Stewart and wife, Judy of Telford; a sister, Debbie Tate of Knoxville; a close in-law, Karen Curtis of Johnson City; two uncles, Jim Krell and family and Larry Krell and family; two aunts, Mary Brown and her husband, John of Johnson City and Alice Harrell and husband, Bobby of Jonesborough; special friends, Larry Keplinger, Ron Honeycutt and Gary Burgess; also several nieces and nephews. Funeral services for Mr. Stewart will be conducted at 7:00 PM Tuesday, August 3, 2021 at the Central Church of Christ, 2272 E. Oakland Avenue, Johnson City with Mr. Tim Hall officiating. The family will receive friends at the church from 6:00 PM until the service hour. Graveside services with military honors will be held 11:00 AM Wednesday, August 4, 2021 in the Mountain Home National Cemetery, Annex, 215 Heroes Drive, Mountain Home, TN 37684. (Please enter from State of Franklin Road.) For those attending this service you are asked to meet at the cemetery by 10:50 AM. Honorary pallbearers will be the ETSU Public Safety Alumni. The family would like to give special thanks to Margie Watkins and family from South Carolina for their visits and extra care they provided. Condolences may be made online at www.wadugger.com. Woodall-Anderson and Dugger Funeral home, 108 W. Watauga Avenue, Johnson City is serving the Stewart family. 423-928-2245

Joe Jimmie Stewart, 73 of Johnson City passed away Wednesday, July 28, 2021 at The Waters of Johnson City. He was a native of Johnson City and was a son of the late Clayton C. Stewart and Leona Krell Stewart. Mr. Stewart was a member of Central... View Obituary & Service Information

The family of Joe Jimmie Stewart created this Life Tributes page to make it easy to share your memories.

Send flowers to the Stewart family.