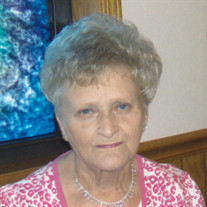 (RESCHEDULED TO WEDNESDAY January 19, 2022 SAME TIMES ) Jo-Ann Bennett Clay, 80, Johnson City went home to be with the Lord, Tuesday, January 11, 2022 in the Franklin Woods Community Hospital. She was a native and lifelong resident of Johnson... View Obituary & Service Information

The family of Jo-Ann Bennett Clay created this Life Tributes page to make it easy to share your memories.

Send flowers to the Clay family.