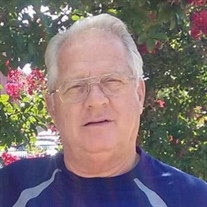 Jerrell Van Byrd, 75, Johnson City went home to be with the Lord, Sunday, January 2, 2022 in the Johnson City Medical Center. He was a native of Mitchell County, North Carolina and was a son of the late Marshall Lee Byrd and Mae Greene Byrd. Jerrell retired from East Tennessee State University where he had worked in the Vehicle Maintenance Department. He was a member of the United Pentecostal Church of Gate City, Virginia. Jerrell was a Vietnam Veteran where he served in the U.S. Army. Jerrell loved spending his time with his family more than anything. You could find him many times at a steam, trout fishing with his friends, family and grandsons. He loved and lived for the Lord and showed it daily in his walk of life. Jerrell never met a stranger and if he said he was praying for you, you knew he meant it. He made this world a better place, just being here. In addition to his parents he was preceded in death by a son, Jerrell Van Byrd Jr.; a brother, Sherrill Byrd and a sister, Pamela L. Snyder. Survivors include his loving wife, Brenda Burleson Byrd; a son, Richard Van Byrd and his wife, Sharon of Kingsport; his daughter, Monica G. Cantrell and her husband, Jeffrey of Jonesborough; two sisters, Brenda Sue Hartley of Unicoi and his twin sister, Sabra Ann Hobson and her husband, Baxter of Marion, NC; two grandsons, Hunter Blake Byrd and Rylan Cantrell; granddaughter, Addilyn Mae Cantrell; several nieces and nephews. Graveside services with Military Honors for Mr. Byrd will be conducted at 2:00 PM Thursday, January 6, 2022 in the Silver Chapel Baptist Church Cemetery, Highway 80 South, Bakersville, NC 28705 with Pastor Danny Grizzle and Rev. Calvin Grimm officiating. Family and friends will serve as pallbearers. There will be a memorial service scheduled for Jerrell at a later date, which will be announced. For those attending this service you are asked to meet at the cemetery by 1:50 PM. Condolences may be made online at www.wadugger.com. Woodall-Anderson and Dugger Funeral Home, 108 W. Watauga Avenue, Johnson City is serving the Byrd family. 423-928-2245

Jerrell Van Byrd, 75, Johnson City went home to be with the Lord, Sunday, January 2, 2022 in the Johnson City Medical Center. He was a native of Mitchell County, North Carolina and was a son of the late Marshall Lee Byrd and Mae Greene Byrd.... View Obituary & Service Information

The family of Jerrell Van Byrd created this Life Tributes page to make it easy to share your memories.

Jerrell Van Byrd, 75, Johnson City went home to be with the Lord,...

Send flowers to the Byrd family.