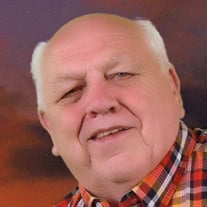 Corrected obit for Rev. George Hall Due to sickness in the Church, Rev. George Hall’s Celebration of Life Service that was scheduled for Thursday will be rescheduled to a later date, that will be announced. Graveside services that was scheduled for Friday at 11:30 AM in the Happy Valley Memorial Park will still take place. The family asks that everyone attending to wear a mask and practice social distancing. For more information you may call the funeral home at 423-928-2245. Rev. George M. Hall, 76, Johnson City passed away Monday, September 14, 2020 in the Johnson City Medical Center. He was a native of Johnson City and was the son of the late Albert and Martha Garland Hall. Pastor George retired from the State of Tennessee and had worked part time for Unicoi County Juvenile Probation. He was a veteran having served his country in the United States Air Force. Pastor George was the current Pastor of the Church of Jesus in Johnson City where he had served for 48 years. In addition to his parents he was preceded in death by his wife, Vivian Hall in 2010 and two brothers, Russell and James Hall. Survivors include his son, Robert Denton Hall and his wife, Andrea of Johnson City; a sister, Frances Jackson of Johnson City; several nieces and nephews; also his church family and his many friends. Graveside services will be held at 11:30 AM Friday, September 18, 2020 in Happy Valley Memorial Park, Elizabethton. Active pallbearers will be Randall Webb, Brad Dinger, Matt McMillan, Jim Tester, Jim Tester Jr. and Carl Fleenor. Honorary pallbearers will be his church family. For those attending this service you are asked to meet at the cemetery by 11:20 AM. In lieu of flowers the family asks that donations be made to the Church of Jesus, 809 West Main Street, Johnson City, TN 37604. Condolences may be made online at www.wadugger.com. Woodall-Anderson and Dugger Funeral Home, 108 W. Watauga Avenue, Johnson City is serving the Hall family. 423-928-2245

Corrected obit for Rev. George Hall Due to sickness in the Church, Rev. George Hall&#8217;s Celebration of Life Service that was scheduled for Thursday will be rescheduled to a later date, that will be announced. Graveside services that was... View Obituary & Service Information

The family of Rev. George M. Hall created this Life Tributes page to make it easy to share your memories.

Due to sickness in the Church,...

Send flowers to the Hall family.