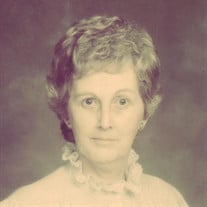 FRANCES McKAMEY HAMLETT 95 of Johnson City, TN, peacefully went home to be with the Lord on Wednesday December 8, 2021. Frances was born on August 17, 1926, in Bluff City, TN, to the late T. I. McKamey and Ruby Allen McKamey. She had lived in Johnson City most of her life and graduated from Science Hill High School in 1943. In addition to her parents Frances was preceded in death by her daughter Pamela J. Reising, three brothers, Thomas C. McKamey, Howard A. McKamey, and LT J.B. McKamey, who was shot down on DDay at age 22, and one grandson, LT Brian N. Hamlett, U.S. Navy. Frances was also preceded in death by a daughter-in-law, Liz Hamlett. Frances was also preceded in death by her companion Howard Jewett. Frances was a loving mother of three, grandmother of five, great-grandmother of six. She also had a life-long friend Jeanette Cunningham, who preceded her in death. Frances loved being with her entire family and spent 33 years working at Kroger to provide for her family. Frances was a life long member of Munsey Memorial Methodist Church and made sure her three children attended each Sunday while they were growing up. Even through some adversities of Life, Frances always maintained a positive outlook with a smile on her face and a kind word for all. Those left to cherish her memory include, two sons, Jack Hamlett and wife, Liz Hamlett, and Robert Allen Hamlett, four grandsons, Tom Hamlett and wife Brittany Hamlett, and Darrell Hamlett and wife Amanda Hamlett, Garrett Reising, and Justin Reising and wife Gabby, and six grandchildren. The family of Frances D. McKamey Hamlett will receive friends from 12:00 noon until 1:00 PM Monday, December 20, 2021 in the East Chapel of Appalachian Funeral Home, 800 E. Watauga Avenue, Johnson City. The funeral service will follow with Pastor Michael Lester officiating. Graveside services will follow in the Monte Vista Memorial Park. Pallbearers will be selected from the family and friends. In lieu of flowers contributions can be made in honor of Frances Hamlett to the Melting Pot at Munsey Memorial Methodist Church at P O Box 1336, Johnson City, TN, 37605. This obituary was lovingly written by her family. Condolences may be made online at www.wadugger.com. Arrangements by Woodall-Anderson and Dugger Funeral Home, 108 W. Watauga avenue, Johnson City. 423-928-2245

FRANCES McKAMEY HAMLETT 95 of Johnson City, TN, peacefully went home to be with the Lord on Wednesday December 8, 2021. Frances was born on August 17, 1926, in Bluff City, TN, to the late T. I. McKamey and Ruby Allen McKamey. She had lived... View Obituary & Service Information

The family of Frances McKamey Hamlett created this Life Tributes page to make it easy to share your memories.

Send flowers to the Hamlett family.