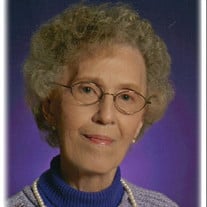 Ellen Haynes Ferguson 162 Avonlea Place, Johnson City TN passed away Nov 30, 2019. She was born Sept. 1, 1921 in the countryside near Gallatin, TN Her parents were Clara Fitzpatrick Haynes and Campbell Harrison Haynes. She graduated from Gallatin High School and attended St Thomas School of Nursing in Nashville, TN. She moved to Johnson City in 1952 and loving the mountains and lakes lived out her life happily here. She worked as an LPN at Memorial Hospital in Johnson City and at the Johnson City Medical Center starting on September 1, 1980. She retired in 1985. She was a member of the United Daughters of Confederacy, Alliance for Continuing Learning at East Tennessee State University, First United Methodist Church, the Suzanna Wesley Sunday School Class and the United Methodist Women. She was a member of the Andrew Jackson Democratic Women and the JCPL reading group In addition to her parents she was preceded in death by a sister Eleanor Haynes Lemons of Nashville, TN, and grand-son-in- law Kelvin Christian. She is survived by her son, Clint S Ferguson II of the Netherlands, grandson, Clint S Ferguson III and wife, Wendy of Cumming, Georgia and granddaughter, Julia Ferguson Christian of Lanexa, Virginia and by two great grandchildren. The family would like to thank her wonderful caregivers: Amy, Tammy, Jessica, Heather, Annie and the nurses from Amedisys Hospice and friend Mary Roseberry for all the care and support they have given Ellen. In lieu of flowers, donations may be made to the First United Methodist Church of Johnson City in Ellen’s name. A memorial service will be conducted at 1:30 PM Saturday, January 11, 2020 at Appalachian Funeral Home, 800 E. Watauga Avenue, Johnson City with the Rev. Jodie Ihfe officiating. The family will greet friends from 1:00 PM until 1:30 PM. Condolences may be made online at www.wadugger.com. Woodall-Anderson and Dugger Funeral Home and Cremation Services, 108 W. Watauga Avenue, Johnson City is serving the Ferguson family. 423-928-2245

The family of Ellen Haynes Ferguson created this Life Tributes page to make it easy to share your memories.

Send flowers to the Ferguson family.