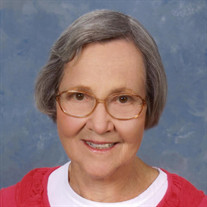 Daisy Lee Walters, 93, Johnson City, went home to be with the Lord on Tuesday, March 22, 2022, in the NHC Health Care Center of Johnson City. She was a native of Jonesborough and was the daughter of the late Lawrence and Elizabeth Denny Livingston. Mrs. Walters retired from Johnson City Medical Center where she worked as a respiratory therapist. She always had a desire to serve God by helping others. She supported Woman's Missionary Union's various ministries and Operation Christmas Child and was always active in her church where she began teaching Sunday School classes at a young age. For 25 years, she served coffee in the ICU waiting room at JCMC, offering a listening ear or a prayer to those who were concerned about their loved ones. She was a founding member of Trinity Baptist Church of Jonesborough where she taught the Challenger Class for many years. In addition to her parents, she was preceded in death by her husband, Hugh Darril Walters in 1978; a daughter, Donna W. Archer; two brothers, George M. Livingston and Claude Livingston, a sister, Violet Blackburn and a half-brother, Blane "Bill" Livingston. Survivors include her children, Sharon Walters-Bower and husband Randy of Lynchburg, Va., Denny L. Walters and wife Amy of Somerset, Ky., and Gordon W. Walters of Johnson City; two brothers, Wayne Livingston and wife Mary Ruth of Johnson City and Charles Daniel Livingston and wife Gale of Louisiana; grandchildren Todd Archer (Tina), Kevin Archer, Kelly Story (Brett), Darril Walters (Nickie), Elizabeth Davis (Scott), Stacie Bower (Brent), Dane Bower, Lucas Walters and Chloe Walters; great-grandchildren, Grace, Ellie, Lillie, Holden; and several nieces and nephews. The family will receive friends from 2-4 p.m. Sunday, March 27, at Appalachian Funeral Home, 800 E. Watauga Ave., Johnson City. Graveside services for Mrs. Walters will be conducted at 11 a.m. Monday, March 28, in the Eden Cemetery, Greenwood Drive, Jonesborough, with Pastor Mark Harrod officiating. Family will serve as pallbearers. For those attending, please meet at the cemetery by 10:50 a.m. In lieu of flowers, the family asks that contributions be made to the Trinity Baptist Church Building Fund, 260 Headtown Road, Jonesborough, TN 37659. Condolences may be made online at www.wadugger.com. Arrangements by Woodall-Anderson and Dugger Funeral Home, Johnson City. 423-928-2245

Daisy Lee Walters, 93, Johnson City, went home to be with the Lord on Tuesday, March 22, 2022, in the NHC Health Care Center of Johnson City. She was a native of Jonesborough and was the daughter of the late Lawrence and Elizabeth Denny Livingston.... View Obituary & Service Information

The family of Daisy Lee Walters created this Life Tributes page to make it easy to share your memories.

Daisy Lee Walters, 93, Johnson City, went home to be with the...

Send flowers to the Walters family.