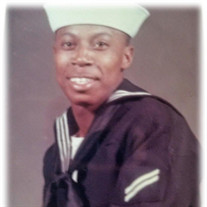 Charles Edward Scott, 74 years old, entered into Heavenly Rest on Thursday, March 5, 2020 at the Johnson City Medical Center. Charles was born in Princeton, West Virginia to Oliver Tobias Scott and Grace Cedalhia Brown-Scott. Charles accepted Christ as Savior at a young age and was a faithful member of Thankful Baptist Church of Johnson City, Tennessee. A former deacon, Charles was an avid student of God’s word with one of his favorite verses being Psalms 150:6 “Let everything that hath breath praise the Lord. Praise ye the LORD.” Charles loved his Sunday School class, his family, and almost never met a stranger. Charles is preceded in death by his parents, some siblings, two brother-in-laws, one sister-in-law, and his beloved son, the late Private Kenneth D. Scott, who had also died while proudly serving his country in the United States Army. Known to many as “The Original “S” Boy” or “Traveling Boy Scott,” he proudly served his country in the United States Navy during the Vietnam era, was a former boxer, and a member of Teen Challenge. He also served as an employee of the Department of Veteran’s Affairs Hospital at Mountain Home, Tennessee until his retirement. In his spare time, he enjoyed watching World Wrestling Entertainment television, college and professional football, and old western movies and shows on the weekends. He was dedicated to prayer and praise to his Heavenly Father. Every person he met would almost instantly become a lifelong friend. He adored his wife, Edna, and spending time with his son, Jaymon, who faithfully cared for him until his earthly departure. There was never a dull moment when Charles was around. His West Virginia pride and his notorious smile never failed to fill a room, no matter where he went. Charles will be truly missed. In addition to his loving wife, Edna, Charles leaves to cherish his precious memories: his children: Charles Andrew Scott, Melissa Scott, William Hall, Thomas Hall, Michael Hall, all of Columbus, Ohio; Tina Pannell, Princeton, West Virginia; Emily Grace Hill and Lamont Hill, Fayetteville, North Carolina; his step children: Marque Diamondcrest (Rachel), Yuma, AZ; Shelea Birks, Jaymon Johnson (of the home), Johnson City, TN; Rev. Justin Johnson (Amanda), Titusville, FL. He also leaves his siblings: Oliver Scott, Princeton, WV; Mary Scott, Shiloh, NC; and Loretta Wilson, Hickory, NC, and sister-in-law, Adeline Birks-Madison, Johnson City, Tennessee; Vanette Birks, Sacramento, CA; and Elizabeth “Libby” Birks, Harrisburg, PA; and brother-in-law Joe Birks, Johnson City, TN. Finally, Charles leaves 30 grandchildren and 13 great-grandchildren along with several nephews and nieces. The Celebration of Life for Charles Scott will take place at the Thankful Baptist Church located at 1501 East Watauga Avenue in Johnson City, TN on Friday, March 13, 2020 with visitation beginning at 11:00 AM and Service at 12:00 PM. The Rev. Justin Johnson (Truth Free Will Baptist Church of Titusville, Florida), Rev. Carl E. Moody (Pastor of the Mount Olive Baptist Church at Johnson City, Tennessee), and Evangelist Mary Scott will be officiating. The service will be followed by an interment at the Veteran’s Affairs Cemetery at the conclusion of the Celebration of Life service. Funeral arrangements and services are being proudly handled by Woodall, Anderson, and Dugger Funeral Home of Johnson City, Tennessee. The family of Charles Scott wishes to thank the staff and nurses of the Johnson City Medical Center and the physicians of East Tennessee State University for their care and service. The family would like to especially thank everyone for their visits, cards, donations, and continuous prayers. 423-928-2245

The family of Charles Edward Scott created this Life Tributes page to make it easy to share your memories.

Send flowers to the Scott family.