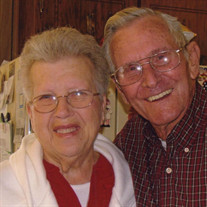 Annie W. Whetsell, 87, Johnson City passed away Friday, October 22, 2021 in the Johnson City Medical Center. She was a native of Mitchell County, North Carolina and was a daughter of the late Robert and Hannah Gardner Riddle. Mrs. Whetsell had... View Obituary & Service Information

The family of Annie Riddle Whetsell created this Life Tributes page to make it easy to share your memories.

Send flowers to the Whetsell family.